Coal exports from Indonesia posted a year-on-year and month-on-month decline of 5.77% and 17.85% respectively in June, according to the BPS-Statistics Indonesia. 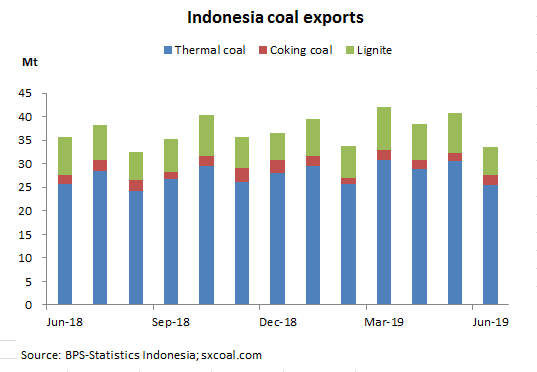 In June, Indonesia exported 25.49 million tonnes of thermal coal (including bituminous and sub-bituminous coal), falling 1.12% on the year and 16.82% month on month. The value of thermal coal exports stood at $1.3 billion. That translates into an average price of $51.01/t.

Over January-June, Indonesia exported 229 million tonnes of coal in total, down 8.9% from 210 million tonnes in the preceding year. Total export value dropped 5.5% year on year to $11.16 billion.

China will strengthen control on coal imports this year in order to prevent the annual inbound volume from exceeding the 2017 level, sources said. Customs authorities will ban the clearin

Demand for liquefied natural gas (LNG) is not as strong as expected over the traditional winter peak demand season. For more than a month, LNG prices across the country have continued to fall.

Trading of spot thermal coal has generally been suspended in northern China ports amid thicker festive atmosphere, with the market in quietness one day away from the Lunar New Year's Eve.

China's installed power capacity totaled 2.01 TW by end-2019, rising 5.8% from a year ago and breaking the 2-TW mark for the first time, according to a report issued by China Electricity Council on Ja

Thermal coal Production area Most mines have started Spring Festival holidays as of January 21, while a few mines were mainly selling stocks and securing shipments to railway stations. The holid

Steel futures in China slipped on January 21, after four straight sessions of gains, as cloudy demand prospects and concerns over the potential economic fallout from an outbreak of a new flu-like viru

The overall profitability of Chinese coal mines improved in December compared with a month ago, monitoring data from sxcoal.com showed. Thermal coal According to the latest data

1 India in talks with Mongolia and Russia for importing coking coal, Pradhan 2020-01-13

Union Minister Dharmendra Pradhan has said India is in talks with Mongolia and Russia for importing coking coal to reduce dependence on few countries for supplies of the commodity. The mi

To further improve services, sxcoal.com will undergo maintenance from 0:00 a.m. January 15 to around January 30. During this period, the website service will be available at www.coalresou

Although renewable power generation is expected to rise significantly in Asia, India's vast electricity needs will still underpin global demand for coal until 2024, according to a recent report releas

Chinese buyers are scrambling to purchase Indonesian thermal coal for fear of supply shortfall caused by heavy rain, traders said. While the rainfall was yet to have substantial impact on

China's coking coal market maintained upward strength late last week, and supply issues continued to back up prices of premium grades of the steelmaking material. A new wave of production