Thermal coal production was generally stable at surveyed mines. Local departments of Shaanxi and Inner Mongolia still put a lid on coal production and sales, which means that mines should not arrange production or sales beyond approved capacity.

Yet recent intermittent environmental checks haven't exerted much impact on coal mine operations.

Stocks As of July 10, thermal coal stocks at surveyed mines in Shanxi, Shaanxi and Inner Mongolia fell 4.8% from a week ago but remained at a relatively high level. By shifting sales strategy, some miners embraced buoyant sales for some high-quality coal grades, leading to declines in coal stocks.

Stocks at mines On July 10, inventories of raw and washed coking coal at surveyed mines decreased 2.21% and 4.13% week on week respectively to low-to-medium levels, a reflection of easing stocks pressure. 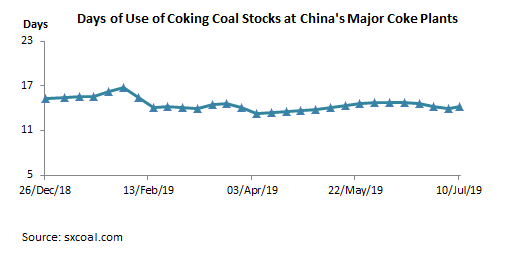 Profit China's coke sector was still in slight profit, though average profit of surveyed coke plants fell 12.9% on a weekly basis during July 4-10.

Stocks at coking plants Coke inventories at surveyed coking plants dipped 1.3% from a week ago to a comparatively low level on July 10, as traders ramped up purchases in main production bases. 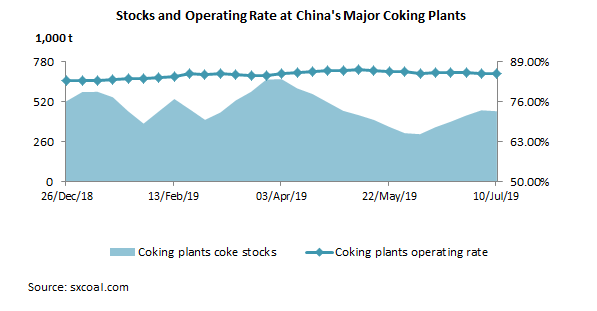 For more dynamic monitoring data for production, sales and stocks at coal and coke firms in China, please contact us at +86 351 7219322.

China will strengthen control on coal imports this year in order to prevent the annual inbound volume from exceeding the 2017 level, sources said. Customs authorities will ban the clearin

Demand for liquefied natural gas (LNG) is not as strong as expected over the traditional winter peak demand season. For more than a month, LNG prices across the country have continued to fall.

Trading of spot thermal coal has generally been suspended in northern China ports amid thicker festive atmosphere, with the market in quietness one day away from the Lunar New Year's Eve.

China's installed power capacity totaled 2.01 TW by end-2019, rising 5.8% from a year ago and breaking the 2-TW mark for the first time, according to a report issued by China Electricity Council on Ja

Thermal coal Production area Most mines have started Spring Festival holidays as of January 21, while a few mines were mainly selling stocks and securing shipments to railway stations. The holid

Steel futures in China slipped on January 21, after four straight sessions of gains, as cloudy demand prospects and concerns over the potential economic fallout from an outbreak of a new flu-like viru

The overall profitability of Chinese coal mines improved in December compared with a month ago, monitoring data from sxcoal.com showed. Thermal coal According to the latest data

Indonesia started 2020 with two important policies in the mining sector: the ban on nickel ore exports and the requirement that coal companies export coal using local ships. As the countr

Indonesian thermal coal prices moved sideways over the weekend with many Chinese buyers leaving away from work for the Spring Festival holidays. Indonesian 3,800 Kcal/kg NAR coal, which t

The monthly-issued price index of power coal by the National Development and Reform Commission declined 8.55% year on year in December, marking the 15th-month negative growth in a row.

China Shenhua Energy Co., Ltd., a listed arm of China Energy Investment Corporation, saw its commercial coal production fall by 4.7% year on year to 282.7 million tonnes in 2019, said the company in a